Ground Penetrating Radar (GPR) is a geophysical technique that has gained popularity in recent years due to its excellent resolution and relative ease of use. You may have seen it in use on television shows such as CSI, Law and Order, and Bones.

GPR is an electromagnetic method that detects interfaces between materials with differing dielectric properties. This allows it to detect metallic and non-metallic, as well as geologic features. The instrument produces a continuous cross section of subsurface reflections that can be viewed by the operator in the field or downloaded to a laptop for more thorough analysis. Multiple profiles can also be compiled into a 3-D dataset, and then sliced at various depths.

Mundell & Associates utilizes a Sensors and Software Noggin Plus System. This system consists of a cart with a built-in survey wheel, and two shielded, interchangeable antennae (a 250 MHz “general purpose” antenna and a 1000 MHz “high resolution” antenna), which are switched out depending on the site conditions and project objectives. The Noggin Plus is a rapid, state-of-the-art data acquisition system that allows data to be collected continuously as it is operated.

GPR is used to provide focused, detailed characterization of study areas, and can yield information about horizontal layering, limits of former excavations and fill areas, and the approximate depth and position of discrete objects, such as utilities, trenches, containers, voids, and sinkholes. 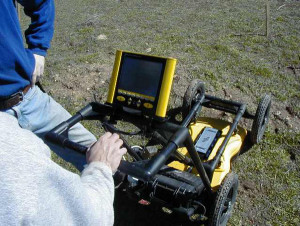 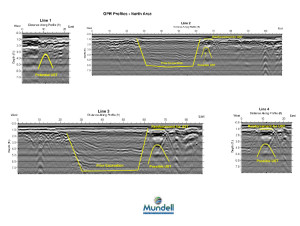 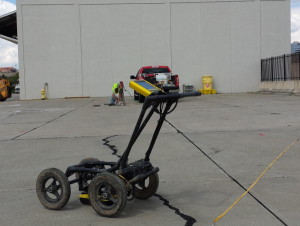