Could your site contain abandoned, forgotten chemical sources areas such as underground storage tanks or drums? What about locating deep metallic utilities beneath a site, or finding an old building foundation? How are you going to locate those objects?

Our EM-61 MKII is a high-resolution, time-domain metal detector, specifically designed to detect metal objects buried within the upper 10 feet of the subsurface. It allows for quick, inexpensive data acquisition (approximately 25,000 data points, per acre, per 1.5 hours). The EM-61 MKII consists of two vertically-separated, coaxial, square coils, each with a dimension of one meter by one meter, mounted to a wheel assembly with a built-in odometer. This instrument is relatively insensitive to interference from nearby surface metal such as fences, buildings, cars, etc., yet it detects a single 55-gallon drum at a depth of 10 feet beneath ground surface! 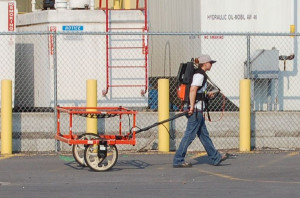 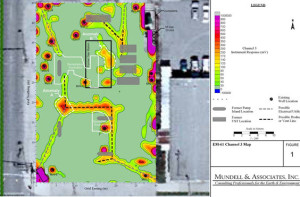