You are here: Home / Science and Environment / Test Your Home during National Radon Action Month 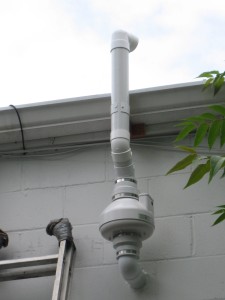 You may be breathing a dangerous, odorless, invisible, and tasteless gas every day at work, home, outside; and you may not even know it.

Radon is a radioactive gas that is released from the natural decay of uranium in soil, rock, and water. Radon is the second leading cause of lung cancer behind smoking, responsible for around 21,000 deaths in the U.S. yearly. According to the Centers for Disease Control and Prevention, the American Lung Association, and the American Medical Association, thousands of lives can be saved from lung cancer every year by reducing radon exposure. Radon gas can seep through any building’s foundations, through holes, cracks, and other passageways. It can also be released from the aging of building structures overtime or found in materials used at the time of the construction. This can become especially hazardous if left to accumulate indoors. The buildup of radon gas puts our society at a higher risk to radiation exposure.

Among the 50 states in the U.S., Indiana is located in one of the highest potential regions in average radon screening. The EPA categorizes 3,141 counties in the U.S. to one of the three zones, according to the following classifications – Zone 1 at “Highest Potential”, followed by Zone 2 at “Moderate Potential”, and then Zone 3 at “Low Potential” to radon exposure. Each county is categorized into a zone based on five factors of consideration, including indoor radon measurements, geology, aerial radioactivity, soil permeability, and foundation type. For Indiana, about 62% of the state (57 out of 92 counties) is categorized in Zone 1 with the remainder of the state in Zone 2. This is alarming information and establishes the importance of performing radon testing in commercial, industrial, and residential environments.

The EPA has designated January as Radon Action Month, encouraging consumers to become aware and take steps to reduce lung cancer. How to protect yourself and others? Radon testing can be easily performed on your own or with professional help. The cost of performing radon testing is comparable to basic building repairs. Self, radon testing kits can be found and purchased at local home improvement centers/stores. If your home or property tests positive for radon, contact Mundell to help you determine your next best course of action.

For more information about radon, radon testing, and treatment resources in the U.S. and the state of Indiana, you can reference: