You are here: Home / Science and Environment / New Air Sampling Technology Used in the Franklin Investigation 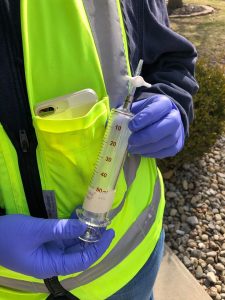 Another round of air sampling is underway in the Franklin, Indiana case as the hunt for contamination continues. Last week Mundell & Associates and Groundswell Technologies worked together under the direction of the Edison Wetlands Association to complete additional air sampling in dozens of homes using new technology to retrieve immediate.

The system, provided by Groundswell Technologies, uses gas chromatography in a mobile lab to continuously monitor air samples for hazardous vapors inside homes. In addition to collecting samples from tubing run through a window screen to an RV outside, air samples were collected using glass syringes which were taken out to the mobile lab. Results are available within 10 minutes compared to traditional testing with air canisters which can take several weeks and shows only a 24 hour average.

This method is also able to show changes based on temperature and atmospheric pressure as samples are collected throughout the day.

The homes tested were part of an at-risk water plume. Mundell assisted Groundswell in the real-time data collection and also collected air samples using traditional methods which will be analyzed and compared in the coming weeks.

Ask for Rachel Walker, Brent Dayharsh or fill out our contact form﻿

Background on the investigation

A group of concerned parents are the drivers behind this investigation into chemical contamination. After a growing number of children were diagnosed with cancer, advocates create an organization called “If It Was Your Child” and enlisted the help of a national environmental non profit group called Edison Wetlands to investigate potential contamination. The results and ensuing publicity caught national attention resulting in several of the mothers traveling to Washington DC to speak and lobby for funding of cancer cluster investigations. The community has been active in voicing concern to local government and IDEM officials as well.

Articles on this latest round of testing