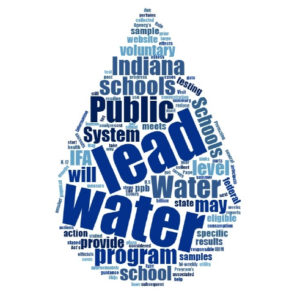 A final report for the Indiana School Lead Sampling Program was released in January 2019 with results for a sampling program of the quality of water in Indiana schools.

The report details some key facts:

Also released in January 2019 was the Report on Lead in School Drinking Water, K-12 Marion County, Indiana. This sampling survey of 297 school facilities in Marion County indicated that 161 schools had at least one test result that exceeded 20ppb of lead in the water.

15 ppb is the current action level set by the Lead and Copper Rule which was instituted by the EPA in 1991, but it is important to point out that the 15 and 20 ppb levels noted in the reports do not provide a measure of health effects, but serve only as a signal that lead levels need to be reduced. Currently, the Environmental Protection Agency (EPA) and the Centers for Disease Control and Prevention (CDC) agree that there is no known safe level of lead in a child’s blood. Lead is harmful to health, especially for children.

To reduce the lead in the school’s water, those with levels exceeding the threshold took steps such as replacing or decommissioning fixtures, adding filtration, placing Handwashing Only signs at fixtures and/or flushing for one minute prior to use (for select kitchen locations).

Retesting of the water after remediation of schools in Marion county indicated that no schools were now exceeding 20ppb of lead.