You are here: Home / Science and Environment / Summer is Here: Grab Your Waders, Your Reflecting Vest and Your Geoprobe 6620dt 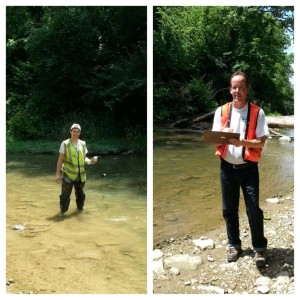 As summer is now in full swing most of can’t stop thinking about ways to cool off in the water. The same holds true for our scientists and engineers.

Brent Dayharsh and Andy White have taken a different approach than what most of us would consider summer fun in the water. Instead of swimming or jumping off the high dive, Dayharsh and White have been testing for petroleum impacts at one job site in Indiana.

The field measurements only take a few minutes to gather but processing the data usually takes the analytical laboratory 1-2 weeks. “Creek sampling at certain points along the river benefits everyone” White said, “it helps trace the source of the contaminate(s) that can get into our drinking water supply and potentially harm us.”