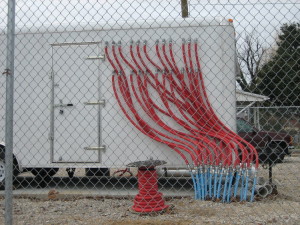 PCE was released at a former dry cleaner facility that operated from 1933 to 1985. After the facility was demolished in 2000, the Indiana Department of Environmental Management (IDEM) directed the environmental investigations and underground storage tanks (USTs) removal. Soil, soil vapor and groundwater testing confirmed the presence of PCE contamination both on and off-site. Indoor air samples of nearby residences confirmed the presence of PCE within the primary corridor of groundwater impacts. IDEM installed individual air mitigation systems within these residences to reduce the presence of PCE vapors to acceptable levels. In 2005, the EPA issued an order to remove PCE contamination from the site as it presented a potential endangerment to the public health. Mundell was contracted to develop a Removal Action Work Plan (RAWP) to achieve unsaturated soils and groundwater cleanup goals while controlling PCE soil gas vapors that had intruded into the foundations of residences.

In June 2005, Mundell performed additional soil borings, groundwater and soil gas monitoring well installation, and indoor air sampling as part of the further site characterization (FSI) activities and determined that the dry cleaning facility had released approximately 3,000 to 7,000 gallons of PCE into the soil and groundwater. A removal action treatment system was selected and designed and consisted of 10 soil vapor extraction (SVE) wells, 23 air sparging well and 12 ozone injection wells. Activated carbon was used to treat the PCE impacted air vapors that we being removed from the vadose zone. The system design included site telemetry and video surveillance that allowed the system component readings to be monitored, controlled and collected remotely. Because the system was installed in a residential area, it was designed not to cause any noise pollution and operated below 10 decibels at a distance of 10 feet from the trailer.

In 2011 and 2012, Mundell also oversaw the injection of EOS® vegetable oil substrate and BAC-9 (bacteria) to further accelerate chlorinated solvent breakdown of the off-site plume.

In 2012, air sampling results indicated significant soil vapor attenuation and soil confirmation sampling indicated improvements to soil quality, the results of which were summarized in a September 2012 Soil Closure Report. EPA approved completion of the soil removal action in February 2013, indicating that on-site PCE soil source had been remediated. The SVE and sparging systems have been shut off to maintain anaerobic conditions needed for reductive de-chlorination in groundwater. Since early 2006, approximately 1.65 tons of PCE had been removed by the system. Mundell continues to monitor groundwater to track progress of reductive de-chlorination in the residual off-site chlorinated groundwater plume.