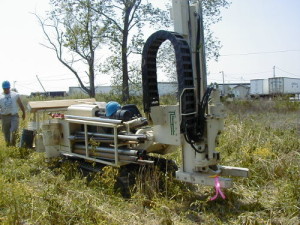 In the spring of 2002 a strong gasoline odor was reported in the drinking water at a small bulk petroleum facility in northern Indiana. The discovery of impacted drinking water at the site prompted investigation of drinking water wells on surrounding properties. This investigation showed that an elementary school (located 1,500 feet downgradient of the site) serving 450 students had MTBE in its water supply at a level ten times greater than the State drinking water advisory level. The State of Indiana required the bulk facility owner to initiate a subsurface investigation to determine if it was the source of the MTBE-impacted groundwater, and if so, to delineate the plume extent and implement remedial measures.

Because of the sensitive population impacted by this MTBE plume and the high level of regulatory and media attention Mundell initiated an expedited site investigation to delineate the extent of the MTBE plume. In less than six months Mundell completed four series of investigations consisting of over 131 direct-push soil borings and 45 monitoring wells. The direct-push soil borings were used to collect soil and groundwater samples across a wide area. The results of the direct-push groundwater samples were used to delineate the vertical and horizontal extent of the MTBE plume. Permanent monitoring wells were then installed for long-term plume monitoring.

Because of the significant length (over 1,300 feet) and three-dimensional character of the dissolved MTBE plume, it could have taken a significant number of expensive monitoring wells to fully delineate the plume. In addition, non-essential monitoring wells would remain as a project liability. By delineating the extent of the groundwater plume with direct-push samples, Mundell was able to limit the number of groundwater monitoring wells to the precise number necessary for long-term monitoring and to complete the investigation in approximately half the normal time.