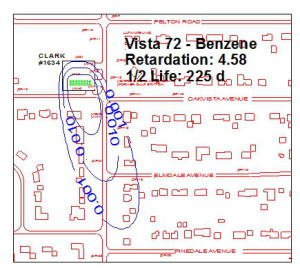 A release of several thousand gallons of gasoline in the early 1980s from a Clark Oil service station located in Clarkston, Michigan resulted in the State of Michigan hooking up nearly 200 residents to a new city water supply. Subsequent to the release, Clark investigated the extent of contamination, and designed a soil vapor extraction and air-sparging system to reduce the levels of in-situ dissolved hydrocarbons. The State of Michigan sued Clark for the cost of the hookup of all residents to the city water supply. Clark wanted a scientific evaluation of the need for this action, and an assessment of the impact of ongoing remediation on the future dissolved hydrocarbons in the groundwater.

Mundell was called in to provide expert witness services to Clark. A regional two-dimensional groundwater flow model was developed using local surface water bodies and wetlands as boundary conditions. The model was calibrated with groundwater levels measured in local monitoring wells over a period of several years. A two-dimensional numerical contaminant transport model was then developed using the calculated groundwater flow velocities and directions to determine the predicted extent of the dissolved petroleum hydrocarbon plume downgradient of the Clark Station.

Calibration of the transport model with actual analytical testing results indicated that the hydrocarbons had an in-situ half-life of about 360 days, consistent with other published data for similar sites. The modeling results indicated that only about 12 out of the 200 houses could have ever been impacted by the release, and that hooking the entire community up to a city water supply was not necessary for the protection of public health. The model also predicted the positive results of the active remediation occurring at the site, and the time necessary for plume stability and retreat. These results were used to perform a risk assessment that supported the cessation of remediation activities of the site prior to reaching drinking water quality. Based on Mundell’s risk analysis, a civil court found that Clark Oil was only responsible for the cost of hooking up 26 houses immediately downgradient of its facility.

Land degradation has increased around the world as our human activities pollute or degrade the quality of soil, affecting not only food production but the overall ecosystems. What can we do locally to preserve our soil?