You are here: Home / Portfolio / Conductivity Mapping to Locate a Sand and Gravel Aquifer 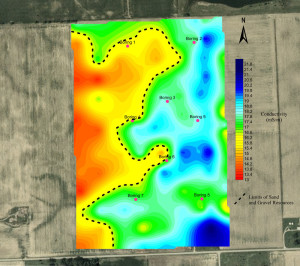 Mundell was contracted to study the extent of sand and gravel resources beneath a 66 acre site in eastern Ohio. In the vicinity of the site, depth to bedrock ranges from 40 to 150 feet, with the unconsolidated soils above bedrock consisting predominantly of fine-grained glacial till with lesser amounts of sand and gravel.

Prior to the geophysical study, eight (8) test borings had been advanced across the site. Based on these borings, it appeared that very little aquifer materials were present. To verify this data, Mundell collected a 60 by 60 meter grid of EM-34 conductivity data. This allowed for a delineation of the overburden materials present at approximately 40 feet below ground surface (BGS). Based on the conductivity data, it appears that at 40 feet BGS, sand and gravel (red to yellow in color) are present beneath most of the western half of the site, with only one of the test borings (Boring 1) being located in the aggregate reserve. Vertical delineation of this reserve body was determined using two-dimensional resistivity profiling, which indicated that thickness ranged from 30 to 50 feet.

The unlucky placement of 8 standard test borings advanced across the site suggested very little resources were present. However, a deep EM conductivity survey performed by Mundell indicated that the borings were just advanced in poor locations, and that abundant sand and gravel were indeed present. Had geophysics not been used, a potentially lucrative site for an industrial water well may have gone ignored. Geophysics provided a true estimate of the water resources beneath the site.