You are here: Home / Portfolio / Analysis of Groundwater Flow Conditions in Limestone Bedrock 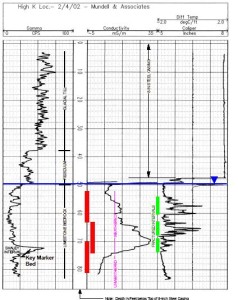 Mundell was retained to perform a geophysical evaluation of borehole flow conditions in a limestone bedrock aquifer below a former manufacturing facility. The groundwater within the aquifer is contaminated with the chlorinated solvent trichloroethylene (TCE) and associated degradation products. The subject study was conducted as a preliminary step in an investigation to evaluate the water quality of fracture zones in the bedrock. The geophysical testing was conducted in one open boring. The role of Mundell in this project was to conduct caliper, heat pulse flowmeter, and borehole video logging prior to packer testing, so that informed decisions could be made regarding the placement of the packers.

Several valuable pieces of information can be derived from the caliper log. First, the location of the steel surface casing and other details related to the construction of the boring can be interpreted. Second, in the open bedrock portions of the well, the locations of potential changes in rock type and the locations of fracture zones can be interpreted. Generally, fractured rock is less resistant to mechanic forces with the result that borehole diameter will be enlarged by the drilling process in fracture zones. A larger, more irregular boring diameter will be indicated on the logs in fracture zones. In contrast, more competent rock will tend to have a much smoother appearance near the drilled borehole diameter.

The video log consists of a real-time color image of the boring with a digital notation of the camera depth on the picture. Changes in fluid, rock type, and the presence of fractures are readily apparent on the video log. After logging a downward view of the borehole, a side-view log was also completed in order to obtain a better view into some of the fracture zones.
The heat pulse flowmeter probe was operated after the other logging probes had been run. This instrument measures the rate of vertical groundwater flow within the borehole by forcing flowing groundwater to flow through a heating grid located between two thermistors and measuring the length of time necessary for a heat pulse to reach either one of the thermistors. The heat pulse flowmeter probe was used to gather information about subtle vertical groundwater flow under near steady state (unstressed) conditions. Measurements were taken at discrete intervals with the probe held steady. Vertically flowing groundwater is forced to flow through the center of the probe.