You are here: Home / Portfolio / Addressing Completed Exposure Pathways at a Petroleum Site 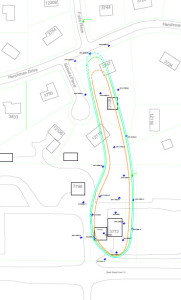 A historic gasoline release occurred at a fuel station facility in Wheatfield, Indiana. Investigative activities identified a plume of dissolved hydrocarbons in the area of an on-site public water supply well, and extending northward off site beneath several homes in a residential subdivision that utilized private drinking water wells. Mundell tested the drinking water within each home in the vicinity of the release, and found that the residents in four homes were drinking petroleum-impacted water. Additionally, vapor testing indicated that vapor phase petroleum constituents were present at over 10 times respective IDEM commercial/industrial indoor air screening levels within the on-site station building.

Mundell supervised the installation of carbon filtration systems in each of the four homes previously found to have drinking water impacts. Each system was fitted with two granular activated carbon (GAC) vessels plumbed in series. Testing of each system was completed before residents were advised that their water was safe to drink.

During succeeding months, Mundell conducted drinking water samples from over twenty surrounding homes and at a nearby school to verify that no other drinking water sources were impacted. Mundell then partnered with the county health department and IDEM to conduct a public meeting. The community had voiced considerable concern during the drinking water sampling and off-site investigative activities and it was hoped that a community meeting might allow IDEM and Mundell to address their concerns in a public forum. Over thirty residents attended the meeting.

Mundell installed two air mitigation systems in order to address vapor intrusion concerns within the on-site station building. Each system was constructed in accordance with current American Association of Radon Scientists and Technologists (AARST) guidelines. Concrete in the vicinity of each system was sealed to prevent the sub-slab intrusion of surface air during system operation. Each system was fitted with a vacuum gauge to allow plant personnel to monitor the system network for proper operation. A sample port threaded into the effluent stack of each system will allow for future effluent vapor sampling, if needed. Post-startup vacuum measurements indicated that the mitigation systems were working as designed.

Mundell received positive feedback from local residents after the public meeting. Each drinking water treatment system will continue to be serviced on a monthly basis.