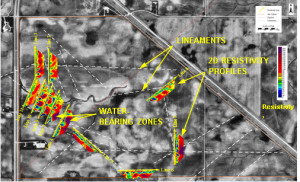 Mundell was contracted to locate potential wellfields for a proposed ethanol plant in northwestern Indiana needing significant (up to 1200 gallons per minute) water supplies within a 590-acre site. In this region, the nominal bedrock depth is about 80 to 100 feet, with the unconsolidated soils above bedrock consisting predominantly of fine-grained glacial till with lesser amounts of complexly interbedded coarse grained sediments. Overall, this is a difficult area geologically to find abundant groundwater yielding formations.

The eleven resistivity profiles collected across the site (see inset map) detected twenty potential water-bearing zones including eight possible fracture zones and twelve possible zones of sand and gravel. Drilling at these locations produced wells with capacities of up to 800 gallons per minute.