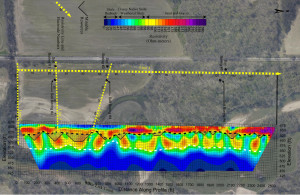 Mundell was contracted to approximate aggregate resources beneath a 20 acre site in central Indiana. In this region, the nominal bedrock depth is about 100 to 130 feet, with the unconsolidated soils above bedrock consisting predominantly of fine-grained glacial till with lesser amounts of complexly interbedded coarse grained sediments. However, as a stream bordered the site, sand and gravel resources were expected.

Prior to the geophysical study, six (6) test borings had been advanced across the site. These borings indicated a great deal of variability in the thicknesses of the aggregate across the site. To better understand this variability, and to delineate the areas of thickest resources, Mundell collected four (4) two-dimensional resistivity profiles to image the upper 150 feet of the subsurface. These profiles were studied for presence of aggregate, and then analyzed from a mining perspective, to determine which of the detected resources were minable. Next, the data were compiled into a three-dimensional data set, and slices were taken at elevations where the sand and gravel were most prominent. These slices allowed for a lateral approximation of the aggregates to be made, and then a volume approximated, using estimated thicknesses and standard slope values.

The four resistivity profiles collected across the site indicated not only the various zones of aggregate resources, but allowed for thickness and volumetric approximations to be made. This information (collected in only two days) allowed the client to make an informed decision in regards to mining the site. 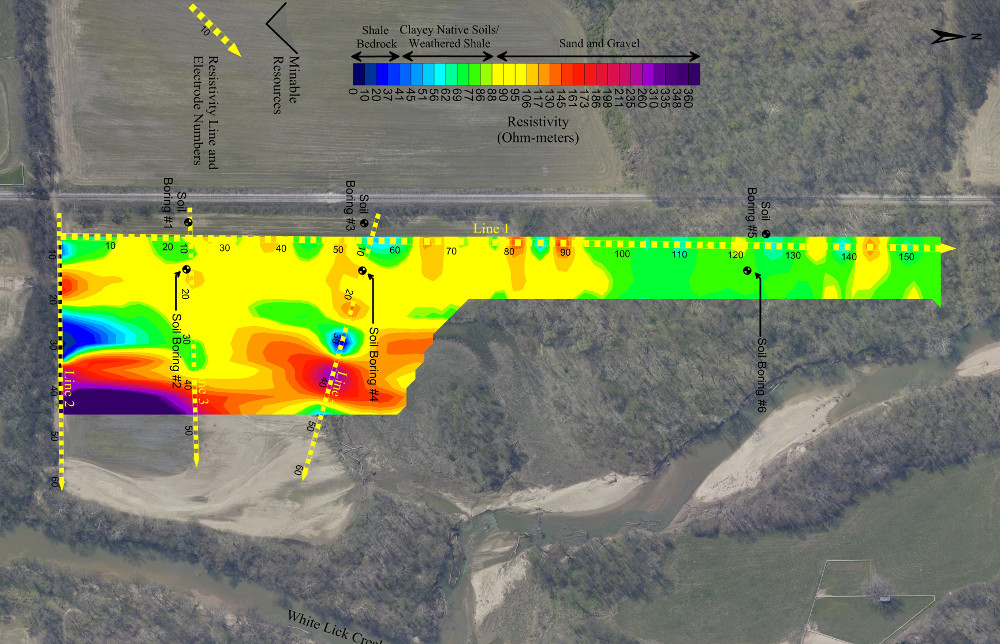