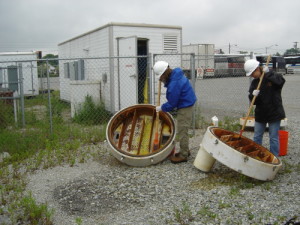 The cleaning of airstrippers, a routine maintenance requirement of many pump and treat remediation systems, is a very labor intensive process. This procedure was traditionally an all-day event for at least two people. The standard procedure was to disassemble the airstripper and scrape the individual trays to remove the built up mineral deposits. In some cases an acid was used to dissolve scaling. The objective was to develop a method where by one person could safely and quickly clean an airstripper. 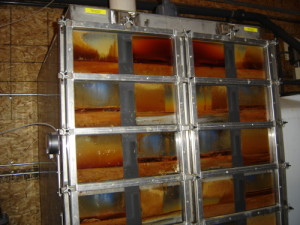 Mundell recognized that to make this procedure viable for one person to perform, a way of cleaning the airstripper without disassembling it would have to be developed. After investigating several alternate methods of in-situ cleaning, Mundell decided that an acid wash of 31% hydrochloric acid, also commonly know as muriatic acid, would be the most efficient. The airstripper water discharge would be isolated from the rest of the system and routed back to the inlet of the airstripper. The acid would then be added to the water in the collection sump of the airstripper and re-circulated, with the blower off to prevent foaming, with the use of the systems own transfer pump. This method was first tried on an airstripper with a glass front so that the effectiveness of the procedure could be easily observed. After the desired effect had been accomplished, the pH of the water was tested. Common baking soda was then added to the water as necessary, and re-circulated to raise the pH to safe levels for discharge. At sites which contain carbon vessels as part of their treatment process, the vessels can be added to the re-circulation loop to raise the pH of the water instead of the baking soda. This has the added benefit of cleaning out deposits in the carbon vessels.

After fine-tuning the process, Mundell was able to transform an all-day two person ordeal into an approximately 4 -hour one-person job. Using this acid re-circulation loop has reduced the number of man-hours required to clean an airstripper by 75%.