You are here: Home / Portfolio / Geophysical and Detailed Site Mapping of Cemetery Grounds 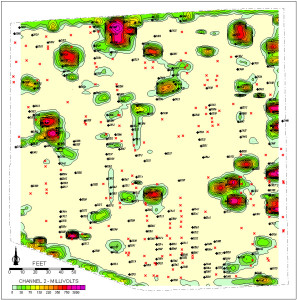 Indiana, like other locations around the world, contains practically innumerable small, privately owned cemeteries, which have relatively long histories, often spanning back to the early days of Indiana statehood in 1816. Mundell was retained by a Cemetery Association to assist them in documenting and accurately marking the existing marked graves (over 450) in one of these cemeteries, using modern surveying techniques, and utilizing geophysical methods for identifying potential unmarked graves, most of which would be presumed to be some of the oldest graves.

This approach provided value both in terms of preserving the identity and locations of the graves, as well as offering insight into the locations of some unmarked graves. GPR amplitude mapping appeared to have provided the single greatest insight and level of detail pertaining both to graves containing metallic objects (vaults and caskets) and graves retaining little more than disrupted soil strata and human remains. Conductivity mapping with a high resolution conductivity meter such as a Geonics EM-38 combined with gridded GPR mapping appeared to have the best potential combination of methods for mapping unmarked graves.

Read more about this project from our publication at SAGEEP 2003.

Give cardboard tubes to pet hamsters or gerbils. Plant seeds in an egg carton. Make a flower pot out of a plastic ice cream tub. Many household items can be repurposed in creative ways to recycle and reduce waste.