You are here: Home / Portfolio / Drain Mapping At An Active Industrial Facility 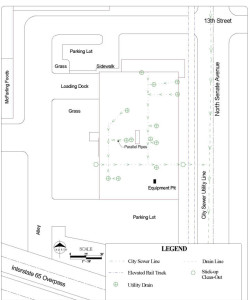 A summary map developed based on geophysical investigation (EM and GPR techniques) to map drain lines at the active industrial facility.

Mundell was contacted to map out a drain system at a local industrial facility. The facility had been the site of remedial activities associated with the release of perchloroethylene (PCE), and it was believed that the drain lines were acting as conduits for the contamination, which was leaking through the joints connecting the lines.

To map the drain system, Mundell used electromagnetic line tracing in conjunction with ground penetrating radar (GPR) profiling. The line tracing was performed using a Radiodetection Model RD400PXL-2 receiver and a BendiSonde sonde transmitter. The sonde was fastened to a 100-foot metal sewer snake and advanced through each surface drain location. This allowed for mapping of the pipes within an lateral accuracy of 1 foot and a vertical accuracy of 3 inches. Sections where the electromagnetic line tracing could not be used (areas with pipe bends that have sharp curve radii as small as 4 inches) were characterized using GPR mapping. GPR profiles were collected using a Sensors and Software Noggin Plus System equipped with a Smart Cart and shielded 1000 megahertz antennae.

By using the two aforementioned techniques, the site drain system was accurately mapped, allowing for the acute placement of investigative soil borings.

To ensure that as much warm air as possible is delivered through your central system, check the ductwork and wrap any leaks with duct mastic. Distribution losses (what’s lost while air is transported from your furnace through ductwork to the vents) often amounts to 30%. So, sealing ductwork could increase efficiency and the warm air you receive considerably … keeping you warmer and making your furnace work less.