You are here: Home / Portfolio / Remediation of Chlorinated Solvents via CAP-18 Injection 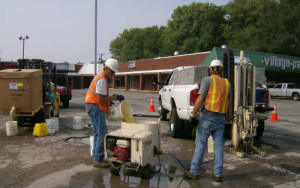 This site has been under investigation in order to evaluate the off-site impacts of the former Genuine Parts and Allison Transmission Plants, located north and northwest, respectively, of the Maple Creek Village Apartments and Michigan Plaza properties. Off-site groundwater samples taken from both the shallow and deep groundwater system indicated chlorinated solvent groundwater impacts (most notably cis-1,2-dichloroethene (cis-1,2-DCE) and vinyl chloride) beneath the apartments above VRP Tier II Residential and Non-residential cleanup goals. The results of the site investigations indicated that the COCs are PCE (and daughter products like TCE, cis-1,2-DCE and vinyl chloride), which were present in soil, groundwater, soil gas and indoor air above IDEM RISC closure and vapor intrusion action levels.

Mundell effectively confirmed an on-site source at Michigan Plaza, and fully delineated chemical impacts to soil and groundwater from past site operations. Injection of CAP-18, a soybean oil bioremediation product, was chosen as the best remedial option approved within the Voluntary Remediation Program for IDEM. Two CAP-18 injection events were completed at the site in 2007 and 2009. The injections were applied in three previously delineated source areas at Michigan Meadows and Michigan Plaza.

Several monitoring locations have exhibited evidence of reductive de-chlorination including decreases in PCE concentrations coupled with increases in cis-1,2-DCE and vinyl chloride concentrations. Within three months of the injection events, reductive dechlorination responses were evident at monitoring wells immediately down gradient of the injection locations. Over time, this same response has been observed moving further downgradient across the site. 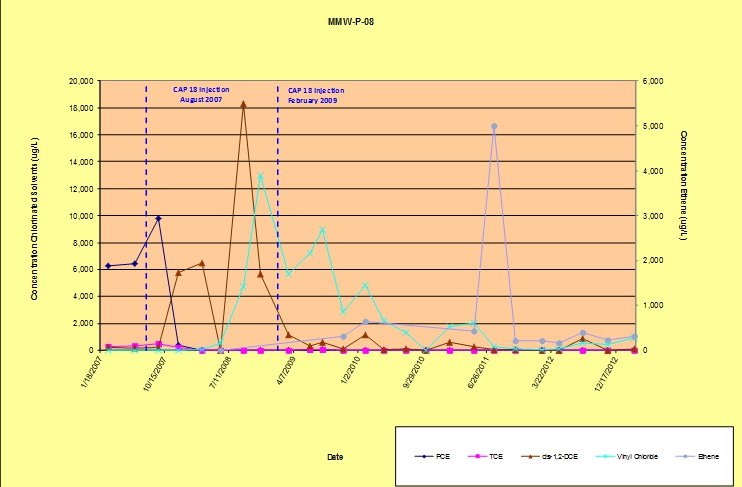