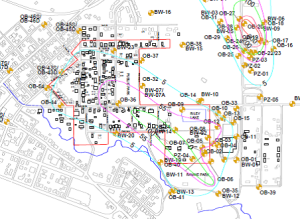 An industrial manufacturing facility operated in a mixed residential/industrial setting in a town in northwestern indiana between 1949 and 2002. The plant produced television tubes and ceramic disc capacitors. Manufacturing processes generated hazardous wastes including multiple volatile and semivolatile organic chemicals (VOCs and SVOCs), heavy metals, and petroleum-related compounds. Historically, spent resins and chlorinated solvents were disposed of in two open and unlined pits near the manufacturing plant.

A food products corporation purchased the property at some point between 2003 and 2006. In March 2009, nearby residents filed a class action lawsuit against the new property owner seeking damages for dimished property values and abatement of contamination alleged to have migrated from the Site to soil and groundwater beneath homes in a geographically-designated class area.

Mundell was retained by a midwestern law firm on behalf of the property owner to render opinions regarding the work activities at the Site. The bulk of Mundell’s work revolved around two fundamental questions: (1) to what degree has the indoor air quality in class area residences been impacted by multiple groundwater plumes eminating from the Site, and (2) to what degree has the poor ambient air quality observed in the community affected the indoor air quality in residences such that the sample results either falsely indicate that vapor intrusion is occurring or elevate the sample levels such that regulatory indoor air action levels are exceeded.

Mundell utilized groundwater analytical data to construct two-dimensional representations of the dissolved Tetrachloroethylene (PCE) and Trichloroethylene (TCE) plumes. Ambient and indoor air analytical data was consolidated and summarized. A vapor intrusion model after EPA (2002) and the Indiana Department of Environmental Management (2006) was constructed for the Site to evaluate the potential for dissolved chlorinated solvents to partition to indoor air, with consideration to groundwater plume concentrations beneath each building, the depth to the groundwater surface, and the near surface soil type. The model output depicted a theoretical areal extent of vapor intrusion exceedances based on steady-state plume conditions. Mundell then assessed the causal relationship between the impacted groundwater plume and the indoor air quality of class area residences by evaluating the strength of spatial relationships within the data.

Mundell found either very weak or no correlations between indoor air and groundwater analytical datasets, suggesting that the groundwater plume was not the only factor affecting the air quality in the residences in the area. Elevated ambient air PCE/TCE levels were found to be present in the town, with 10 out of 27 test locations, or 37%, exhibiting ambient air concentrations above IDEM’s 30-year action levels. Accordingly, the elevated ambient air TCE/PCE levels could cause false positives at the residences that are not located over the most significantly impacted groundwater areas, and could cause some of the indoor air levels to exceed regulatory action levels when they otherwise would not under clean ambient air quality conditions.

With droughts occurring throughout the country, we all can be aware and take steps to reduce the amount of water we conserve.

The “Water – Use it Wisely” website site offers more than 200 water-saving tips.

Source: Water Use It Wisely