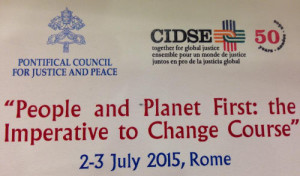 Mundell & Associates president John Mundell was one of 160 people invited by the Vatican Pontifical Council for Justice and Peace to a high-level environmental summit on climate change in Rome, Italy on July 2nd and 3rd.

The gathering was entitled People and Planet First: the Imperative to Change Course. The conference focused on the recent environmental encyclical by Pope Francis “Laudato Si” and included heads of NGOs, environmental scientists, ambassadors, religious congregations and activists.

The meeting kicked off with thoughts by Cardinal Turkson, the head of the Pontifical Council for Justice and Peace. The push for significant environmental conversion and change began with linking the cry of the poor and the cry of the earth.

Participants visited St. Peter’s square toward the event of the conference where a rainbow about the buildings greeted them – a perfect way to top off the event!

As John returned home to Indianapolis, he expressed his joy at attending this summit,

This has been a tremendous conference that highlighted and emphasized Pope Francis’ new encyclical Laudato Si, and how to move it forward. This was an exercise in collegiality to the maximum extent possible – the scope of the encyclical is far, far wider than just climate change, it’s about integral ecology- the human and the environment both are important!

Give Thanks to Mother Earth

Planning a relaxing Thanksgiving with family and friends? Thank Mother Earth this week by creating an environmentally friendly day. Here are some tips for a green Thanksgiving.