You are here: Home / Company News / Marion County’s groundwater work featured in new book “The War on the EPA” 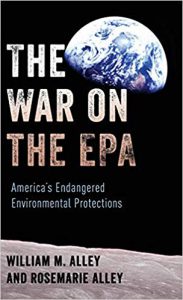 The efforts of the Marion County Wellfield Education Corporation (MCWEC) and Mundell & Associates to identify at-risk businesses were highlighted as one of the communities that has made significant progress in protecting sources of drinking water in delineated wellfield areas.

In the book, Mundell & Associates President, John Mundell describes the county’s move from voluntary groundwater protection by businesses in the wellfield area to a mandatory health code.

“Historically,” John explains, “less than 10 percent of the identified potential chemical sources in the wellfields have worked with MCWEC in any significant way. And because the program was anonymous and voluntary, any dangers to the wellfield that were discovered could not be reported.” It became increasingly obvious that a more aggressive apporach was needed, so the county public health department got on board.

In addition to highlighting the regulatory changes, the authors note how MCWEC works with businesses to educate and bring them to compliance. Rachel Walker, Project Geologist of Mundell & Associates working as a consultant for MCWEC described their efforts:

Walker sits down with the business owner and works out a manageable step-by-step process. She has the contacts and solutions at her fingertips, such as who to call to have old oil removed, or where to go for other problems. If Walker sees meaningful progress during her return visit, she lets the health department know that [the business] is making a good-faith effort. There’s a lot of flexibility, because everyone knows these things take time. After all, they’re not out to bust people. “Our job is to protect the county’s water supply,” she emphasizes.

Critics of the book note it as a must-read for scientists, adovcates, policymakers, and citizens.

The War on the EPA: America’s Endangered Environmental Protections can be purchased at Amazon.