You are here: Home / Company News / Ask a Professional – What sparked your interest in the Earth Sciences? 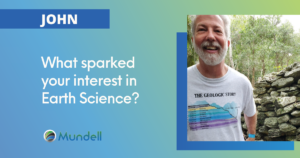 In honor of Earth Science Week, we asked Mundell & Associates President and Senior Environmental Consultant John Mundell how he became interested in the earth sciences.

“I was inspired when I was a kid by the 1959 movie Journey to the Center of the Earth, based on a Jules Verne story about a certain Professor Lindenbrook and his adventures retracing the steps of Arne Saknussemm the lead into the depths of the earth, finding dinosaurs along the way and discovering the lost city of Atlantis. That interest in ‘discovering’ hidden treasures buried in the earth stuck, along with a keen interest in geology and fossils.

I remember digging up our backyard and bringing things I discovered to my mom. At one point, I wanted to be an archaeologist, digging around to find the traces of ancient civilizations. In fact, I spent the summer of 1974 digging at an ancient Middle Woodland-age Indian settlement in southern Indiana along the Wabash River.

A couple of years later in the summer of 1976, just after I finished my freshman year at Purdue University, I joined a student team of geophysicists to explore some Indiana mounds in Battleground, Indiana.

Those early work experiences, combined with some environmental seeds planted in me from my participation in the first Earth Day in 1970, set me on an educational path that would combine geology and engineering, which turned out to be perfect training for the environmental consulting field just beginning at that time.

I often say that environmental consulting is a lot like industrial archaeology, except the ‘buried treasures’ you find are not shards of pottery or stone tools, but leaking underground storage tanks and buried waste piles; and it’s no longer ‘pre-history’ that is uncovered, but the industrial history of the 20th century.

Today, I am still excited and amazed when we discover some unknown geologic complexity or environmental challenge at a site, and find a new way to remediate it.”

Thank you John, for your commitment to the earth and all its inhabitants!