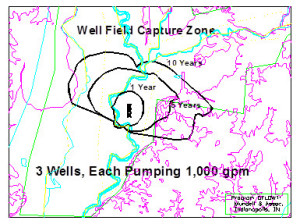 As part of its wellhead protection program, an Indiana water company wanted to determine the 1-, 5- and 10-year time-of-travel delineation zones for its water supply under current (3000 gallons per minute) and future pumping rates. In addition, the water company also wanted to determine the potential impact of a proposed solid waste landfill on the water quality of its water supply.

Mundell provided a detailed geologic and hydrogeologic review and groundwater flow modeling using the computer codes GFLOW and MODFLOW to determine the delineations. A sensitivity analysis was performed to determine the impact of varying the hydrologic parameters (aquifer base, thickness, hydraulic conductivity, recharge, river sediment conductivity) on the calculated production well capture zones. In the area of the landfill, the model incorporated site-specific geologic features and hydrogeologic conditions to determine the migration pathway of potential contaminant releases from the perimeter of the landfill.

Mundell showed from the results of the analysis that groundwater flow and potential leakage from the landfill would travel to the nearest major river system, the White River, before it would travel to the wellfield. Analysis of the dilution effects of the river indicated that no measurable impact to the water supply would be expected. As a result of the analysis, modifications to the proposed groundwater monitoring well network around the landfill were made to locate wells in critical release areas determined by the model. The wellhead delineation zones were also used by the water company as part of its submittal to the Indiana Department of Environmental Management to fulfill its requirements for the new Indiana state wellhead.