You are here: Home / Portfolio / Utility Mapping at an Active Industrial Facility 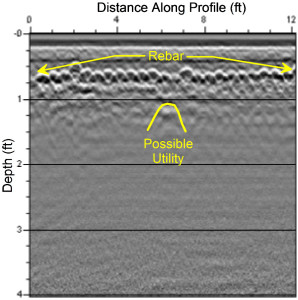 A section of Ground Penetrating Radar profile showing the location of rebar and a possible utility at the active industrial facility.

Mundell was contacted to map out subfloor utilities and clear over forty (40) proposed soil boring locations at an active automotive production plant in Indianapolis, Indiana, as part of an ongoing sampling program. The majority of the facility was covered with large quantities of machinery as well as reinforced concrete, which made the use of many geophysical techniques impossible.

Based on the large number of boring locations and known site features, Mundell selected ground penetrating radar (GPR) mapping to locate utilities across the site. At each proposed soil boring location, a bi-directional, orthogonal, 12 foot by 12 foot grid was established, using the proposed boring location as the center point. GPR profiles were then collected using a Sensors and Software Noggin Plus System equipped with a Smart Cart and shielded 1000 megahertz antennae. All possible utilities detected along each profile line were marked along the ground, with their respective depths noted. Once the grid had been scanned in both directions, a scaled drawing was generated, showing the utility locations relative to the proposed boring location, and allowing for the borings to be moved to the best possible location within the grid.

GPR mapping produced the excellent resolution necessary for the locating of subfloor utilities at an active industrial facility. Not only did this technique allowed for worry-free drilling, but it also increased production, as many boring were able to be moved to areas not containing reinforced concrete, thus negating the need for concrete coring.

To ensure that as much warm air as possible is delivered through your central system, check the ductwork and wrap any leaks with duct mastic. Distribution losses (what’s lost while air is transported from your furnace through ductwork to the vents) often amounts to 30%. So, sealing ductwork could increase efficiency and the warm air you receive considerably … keeping you warmer and making your furnace work less.