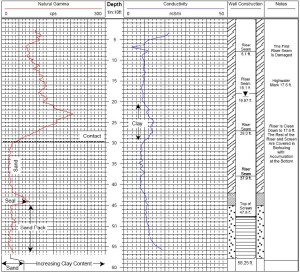 A multi-technique downhole log showing variations in natural gamma and electrical conductivity for a monitoring well.

Prior to contacting Mundell, another environmental consultant had already completed subsurface investigation activities on two adjacent industrial sites in Southern Georgia. However, after a subsequent review of the documentation of activities actually performed at the Site, the client determined there existed a lack of detailed information concerning well construction and hydro-geologic conditions. Mundell was contacted to address these data deficiencies. Specifically, it was requested that Mundell provide: 1) well construction details for some of the existing monitoring wells 2) geologic information about select monitoring wells using borehole geophysical logging; 3) horizontal and vertical survey data for each monitoring well; and 4) hydraulic conductivity of select wells using slug and bail testing.

To obtain information regarding the well construction, Mundell used a downhole camera equipped with both down-view and rotating side-view color cameras with integrated light sources. The video inspection of the wells was used to determine the type of materials used, the positions of the riser pipe and screen, the overall condition and integrity of the well casing, and if any foreign materials were present. To estimate the geologic conditions of the site, natural gamma and electromagnetic conductivity logs collected to provide information on the annular fill materials, as well as the materials outside the annular space. An example of these logs, as well as the well construction results determined from the downhole camera, can be seen above.

The horizontal positions of all the existing site monitoring wells were obtained with sub-meter accuracy using a backpack GPS unit with differential correction. The top of casing (TOC) elevations of the wells were determined using two instruments. Where many wells were grouped closely, a laser level and the corresponding detector mounted to a standard level rod were used. This system has a combined leveling accuracy of ± 0.010 feet at a distance of 100 feet. For wells spaced further away from each other, an optical autolevel was used with a standard leveling rod. This instrument has a maximum leveling accuracy of ± 0.007 feet at 3,000 feet. Hydraulic conductivity testing was performed using 1.5-inch outside diameter, 7-foot long, sand filled, PVC slug, and an in-situ pressure transducer attached to a handheld field computer. A total of 15 key wells selected for their geographic positions across the site, were used to determine an average hydraulic conductivity for the site aquifer.

Upon completion of the survey, it became apparent that not only was information lacking from the previous report, but information regarding the construction of certain wells was incorrect. Actual well depths varied by as much as 20 feet in approximately half of the wells. Also, the client had been told that all of the wells on site had been constructed of standard two-inch schedule 40 PVC. However, video inspection of the wells revealed that three (3) of them were constructed with a two-inch diameter stainless steel riser and a wire-wrapped screen (see figures below). The other downhole geophysical tools not only provided vital information regarding the grain size and sorting of the overburden materials, but also gave extra insight into placement and thickness of the sand pack and seals of each well. Finally, the single well aquifer testing revealed that the aquifer is relatively uniform across the sight, with average hydraulic conductivities of most of the wells ranging from 1 to 4 ft/day.