You are here: Home / Portfolio / Source Removal in Residential Neighborhood 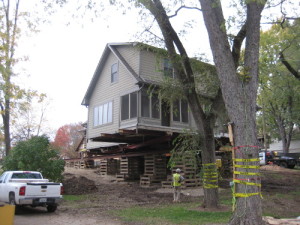 Mundell was contracted to remediate a former manufactured gas plant (MGP) located in a residential neighborhood in Franklin, IN. The plant operated during the late 19th and early 20th century. After the plant was closed, the area was covered and eventually became the site of two residential homes. Preliminary investigations revealed that many of the structures that made up the former MGP still existed underground and still contained residual coal tar. Residual BTEX and PAH contamination was found throughout a majority of the two residential parcels and the adjacent park.

The residential nature of the area presented a unique challenge for the removal action. The goal was to excavate all of the source materials and contaminated soils while keeping the two houses that had since been built on the property intact. Additionally, some of the contaminated soil was located beneath one of the houses, further complicating the necessary removal action. If not properly removed, the contaminants would prevent the continued residential use of the properties. The adsorbed hydrocarbons present below the building would also allow dissolved hydrocarbons to persist indefinitely at levels above residential and industrial closure guidelines, likely delaying site closure for an indeterminate period of time.

Mundell  devised a Remediation Work Plan that involved lifting one of the houses off of its foundation and temporarily moving it in order to remove the contaminated soil beneath the basement. Mundell also designed an on-site water treatment system that allowed groundwater from within the excavation to be pumped, treated, and discharged to the city’s sewer system. A temporary sewer bypass was installed in order to ensure that the impacted soil around the existing sewer line was removed. An added complication to the project was that heavy rainfall caused historically high flood levels in the adjacent creek while the deep excavation below the footprint of the former basement foundation was ongoing. Mundell and its contractor persevered through these difficulties to place a thoroughly compacted/tested foundation sub-base, construct a new foundation, reposition the house on the new foundation, and complete the remaining project soil remediation activities.

Following the house move, basement reconstruction, and excavation/disposal of approximately 12,000 tons of impacted soil, post-excavation confirmation soil sampling was conducted and a groundwater monitoring network was installed and sampled on a regular basis to verify the success of the removal action. The site has been fully restored and is currently in the final stages of groundwater monitoring. It is anticipated that the homes will be placed back onto the residential market for resale in the near future. 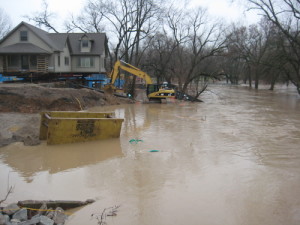 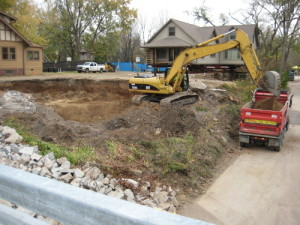 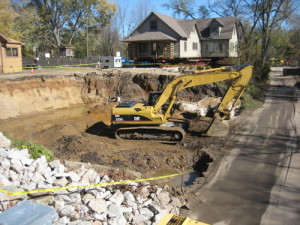