You are here: Home / Portfolio / Site Characterization and Remediation of Chlorinated Solvents 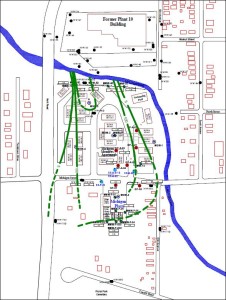 The Michigan Plaza and Michigan Meadows Apartments properties were under investigation in order to evaluate the potential off-site impacts of the former Genuine Parts property located in Indianapolis, Indiana. Off-Site groundwater samples taken from the shallow and deep groundwater system indicated chlorinated solvent groundwater impacts consisting of cis-1,2-dichloroethene and vinyl chloride beneath these properties above the Indiana Department of Environmental Management’s Voluntary Remediation program Tier II Residential and Non-residential cleanup goals. Mundell was contracted by AIMCO, the owner and manager of the Plaza and Apartments properties, to evaluate the potential for indoor vapor concerns related to the groundwater impacts, and assess the severity and extent of the groundwater plumes in the area.

Utility line flow analysis and video camera inspections were also carried out to determine the potential for sewer leaks to the groundwater. Confirmation of additional PCE sources in the plaza area and complete delineation of PCE groundwater impacts were completed. Monitoring wells were installed, and subslab air mitigation systems were also installed on the plaza property to effectively minimize detected vapor levels.

Mundell’s studies concluded that no substantial indoor air impacts were resulting from the plume from the Genuine property; however, air impacts were being observed from dissolved PCE and TCE groundwater impacts appearing on the Michigan Plaza site and southern Apartments property. Three separate chemical source areas were confirmed near an existing sewer line that connected a former drycleaner to the City sewer system. Additional delineation of these PCE and TCE impacts allowed a remediation work plan to be developed and implemented focused on the in-situ bioremediation of these areas.