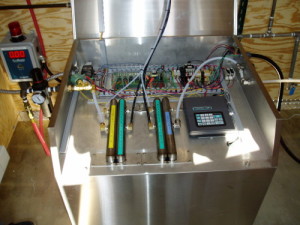 In the spring of 2002, a strong gasoline odor was reported in the drinking water at a small bulk petroleum facility in northern Indiana. Subsequent testing of the water revealed the water on the Site contained high levels of gasoline constituents, including benzene and MTBE. Further investigation showed that an elementary school (located 1,500 feet downgradient of the site) serving 450 students had MTBE in its water supply at a level ten times greater than the State drinking water advisory level. The site owner directed Mundell to prepare a Corrective Action Plan to rapidly remediate the petroleum constituents in the site groundwater and in the downgradient plume.

Mundell recognized that rapid removal of the plume source was essential to an efficient cleanup of the entire plume. After evaluating several potential technologies, Mundell selected ozone sparging of the groundwater as the most appropriate method of removing the plume source area. Initial pilot tests indicated that the site geology was ideal for ozone sparging, thus Mundell moved ahead with full-scale implementation of the ozone remediation system. The permanent remediation system consisted of 16 ozone injection wells, feed by two ozone generators at a rate of 240 grams of ozone per hour. Because of the small diameter of the piping needed to connect the ozone sparging wells, the installation of the system caused minimal disruption at the operating site. The full-scale system became operational in June of 2004. 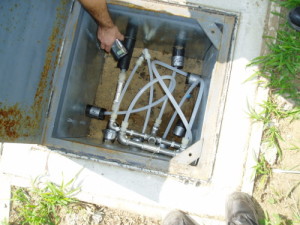 After more than five years of operation, Mundell has documented a dramatic reduction in petroleum constituents in the groundwater beneath the site. Benzene concentrations in groundwater have decreased from a maximum of 21,000 ug/L to below the laboratory detection limit of 5 ug/L in all thirteen observation wells surrounding the system. The total contaminant mass beneath the site has been dramatically reduced. Due to the robust construction of the system and the redundant safety controls, the system has required a minimal amount of maintenance.