You are here: Home / Portfolio / Refraction Microtremor as a Tool to Map Bedrock Fractures 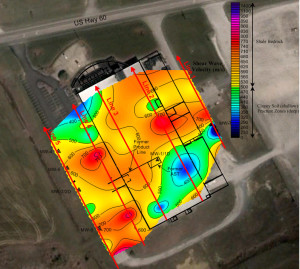 Mundell was retained by an environmental solutions firm to use non-destructive geophysical methods to map out the subsurface geology beneath an industrial site in an attempt to locate any possible bedrock features, bedrock depressions and fracture zones, that could be acting as pathways for soil and groundwater impacts. The challenge in this particular case was the conditions of this Site, it was an active industrial facility with high levels of electromagnetic and seismic interference. Due to these conditions, Mundell chose to image the upper 45 feet of the subsurface by the use of naturally-occurring seismic noise of the Site to determine the shear-wave velocities of the upper geological layers through the Refraction Microtremor (ReMi) method.

In general, the five profiles all showed a similar pattern, with an upper soil layer of low shear wave velocity (200-500 m/s) overlaying a layer of moderate to high velocity bedrock (500-1500 m/s) which is intermixed with several low velocity zones (<500 m/s). The general geologic pattern of these sections was interpreted to be clayey soils overlying shale bedrock, in which several fracture zones were present. This interpretation was consistent with the actual field data obtained from the boring logs available to Mundell, which were advanced in close proximity to several of the ReMi lines.