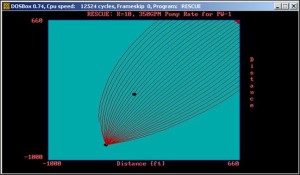 An undisclosed client in Indianapolis, Indiana operated as an industrial manufacturing facility which performed metal stamping, degreasing, painting, drying and assembly operations. During these activities, chemicals used at the Site included coolants and lubricants for machinery maintenance, solvent degreasers for parts cleaning, and paint and coatings utilized during spray paint finishing. Based on the results of groundwater flow modeling conducted by Mundell, a zone of TCE-impacted groundwater was determined to be traveling towards two pumping wells used by the City of Indianapolis to supply water to the Indianapolis Central Canal. Mundell sought to assess the present and future risks posed to human health and the environment by waters pumped into the canal from the contaminated well zone in order to facilitate the development of a Remediation Work Plan.  Mundell would use the results of this risk assessment and well capture zone evaluation to design the appropriate Site-specific remediation system.

Mundell personnel performed three‑dimensional analytical modeling of the impacted groundwater plume to evaluate aquifer characteristics and to forecast probable contaminant migration extents. The semi-analytical, RESSQ solute transport model then was used to simulate the probable concentrations of TCE in waters extracted for transport into the Central Canal. Mundell evaluated the concentrations of TCE in pumped water under several different treatment scenarios to formulate a range of acceptable groundwater plume treatment goals. RESSQ was then used to conduct a capture zone evaluation. The model was used to assess plume capture zones under several scenarios for inclusion in the design of a pump-and-treat system to be housed near the Site. 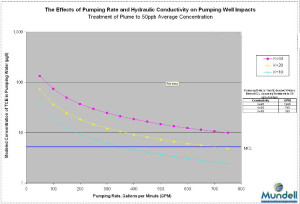 RESSQ was used to design a recovery well system utilizing up to three extraction wells.   It is anticipated that the groundwater treatment system and treatment of the plume to the selected treatment goal will prevent the extraction of groundwater with concentrations exceeding Maximum Contaminant Levels at canal pumping wells.