You are here: Home / Portfolio / Geophysical Search for Buried Waste at an Industrial Facility 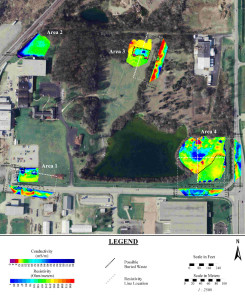 Four areas of concern, along with the corresponding conductivity maps and resistivity lines. The extents of the buried waste are designated by black dotted lines.

In the past, unknown quantities of waste materials related to plant production were buried in various areas on the property of an active industrial site in western Indiana. Recently, Mundell was contacted to use geophysical methods to detect the presence of those buried waste materials, and if determinable, estimate the approximate physical limits of the waste materials. Four (4) areas of concern were presented, the largest of those being approximately 500 feet by 400 feet.

In general, a large variety of geophysical techniques can be applied to the mapping of subsurface materials; however, certain methods, sensitive to a range of contrasting physical properties, can have attributes that make them more suitable than others depending on the site-specific conditions. The key to successful detection of waste materials inherently depends on the existence of a noticeable contrast between the native and fill materials. On this site, the waste materials consisted mostly of decaying poly and vinyl film, buried in glacial till. It was believed that there would be little contrast in the physical properties between the waste materials and the native soil, so a method was needed that would be able to detect very small changes in the physical properties of the subsurface. The technique that Mundell chose to delineate the waste was to quantify the electrical properties of the shallow subsurface using electrical conductivity and resistivity mapping.
The process used to do this was two fold. First, an electromagnetic conductivity survey was conducted in each of the four areas of concern. The goal was to use these surveys to map the horizontal limits of potential waste materials. Then, anomalies detected on the conductivity maps were further characterized using two dimensional vertical resistivity profiling to identify the vertical limits of the possible waste materials.

Anomalies from a number of shallow metallic utilities can be seen on the conductivity maps from Areas 1 and 2, and have been labeled accordingly (see Figure 1). Aside from these , a total of four (4) anomalous zones of potential waste were detected in three (3) of the areas of concern: two in Area 1, one in Area 3, and one large zone in Area 4. No potential waste was detected in Area 2. These zones are denoted by black dotted lines in Figure 1. To determine the vertical extents of these zones, four (4) resistivity lines were collected. The resistivity lines indicated that the possible waste materials range in depth from the ground surface down to fifteen meters, and from six to fifteen meters in thickness. Test pits were dug in these locations, confirming the presence of the waste.