Mundell was engaged on behalf of a small municipality in western Indiana to use geophysics to investigate potential areas of interest for expanding the town’s groundwater supply. Water needs for the Town are currently supplied by two municipal production wells, both installed to a depth of 96 feet and located in close proximity to each other.

Three areas of the Town were chosen for study, each selected for having a good possibility of Town access should they be productive. The area of the existing Town wells was also examined to determine the nature of the aquifer there.

The primary purpose of this geophysical survey was to conduct non-intrusive exploration to evaluate potential locations where an increased likelihood exists of finding adequate high quality sand and gravel for development as a drinking water supply. The general approach that Mundell chose to take on this project was to quantify the electrical properties of the upper 120 to 160 feet of the subsurface along the four lines of geophysical data collection shown on Figure 1. In fresh water environments there is a well-established relationship between the sediment type and electrical resistivity. Coarse-grained sediments (i.e., sand and gravel aquifers) are relatively electrically resistive while fine-grained sediments (i.e., clay and silt) are more conductive. The geophysical study Mundell conducted consisted of the direct measurements of apparent electrical resistivity in a profile-type data set, which is then used to calculate a two-dimensional model of the actual resistivities of the subsurface materials (see example below). 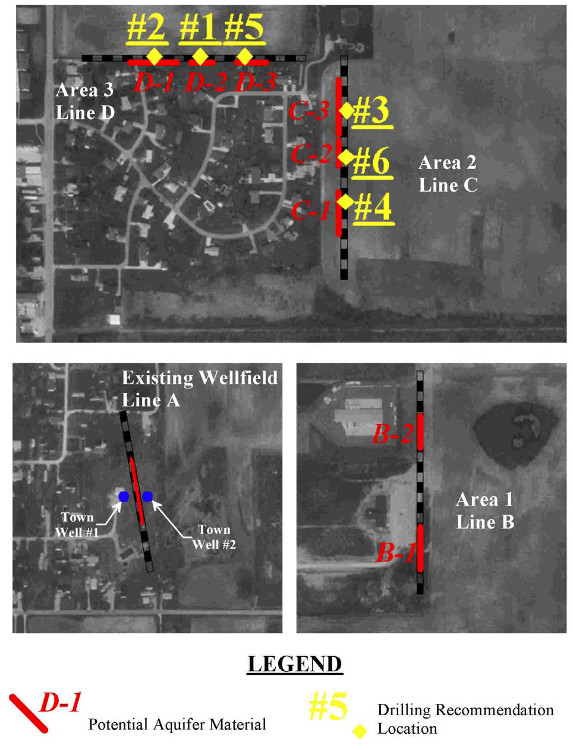