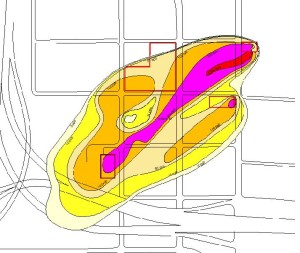 Stewart Manufacturing operated as an industrial manufacturing facility which performed metal stamping, degreasing, painting, drying and assembly operations. During these activities, chemicals used at the Site included coolants and lubricants for machinery maintenance, solvent degreasers for parts cleaning, and paint and coatings utilized during spray paint finishing. Based on the results of various upgradient investigations performed historically by previous consultants and Mundell & Associates, several properties upgradient of the Site appear to be contributing sources of PCE that is impacting groundwater at the Site. Mundell was retained to assess the possible contributing PCE sources to impacts observed at the Site. Proper assessment and analytical modeling activities will then be utilized to design the appropriate Site-specific remediation system and evaluate potential downgradient impacts of the multi-source PCE plume.

After detailed review and evaluation of the geologic and hydrogeologic setting at the Site and surrounding area, five individual 3-D analytical models were formulated and calibrated to represent PCE impact severity and extent as observed during Spring 2009. Results of the five calibrated simulations were combined into a single, large-scale transport model encompassing several city blocks to demonstrate the effect of upgradient plume comingling on the Site and surrounding areas.  Results from the multi-source model indicate source specific contaminant volumes contributing to the comingled PCE plume and will be utilized for additional Site assessment, remedial design and predictive simulations.

The calibrated, multi-source model provided confirmation of multiple upgradient PCE sources contributing to groundwater impacts present at the Site and allowed estimation of PCE concentrations and volumes originating from each identified source area. The Mundell technical team continues its work with this large scale analytical model.   Presently, the multi-source model is being used by Mundell hydrogeologists to support four objectives pertaining to the Site: