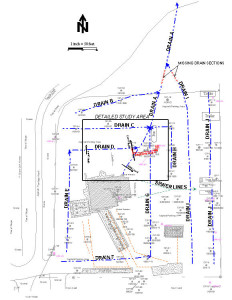 A regional petroleum retailer closed a facility that had been in continuous operation since the 1970’s. Subsequent investigation by Mundell revealed that both soil and groundwater beneath the site were significantly impacted with petroleum hydrocarbons. A limited amount of separate-phase hydrocarbons were present on the groundwater surface in two areas. A dissolved benzene plume had migrated off-site. Given the location of the fuel delivery system at the site and the local geology/topography, it was unclear how petroleum had migrated over such a large area of the site. Definition of the migratory pathway was essential before effective corrective action could be implemented. Because of the presence of separate-phase hydrocarbons and the off-site migration of impacted groundwater, the Indiana Department of Environmental Management (IDEM) ranked the site as a ‘high priority’ requiring soil and groundwater remediation.

Mundell effectively used electromagnetic conductivity (EM-31 and EM-39), 2-dimensional electrical resistivity and ground penetrating radar to reveal the sources of contaminant movement and to map out the contaminant transport network. This network consisted of narrow, interconnected pea gravel-filled drainage trenches crosscut by utility trenches. Pinpointing of the trench locations and routes, critical to placement of boring locations and to the understanding of the flow network, was accomplished by using a Sensors and Software Noggin 250 ground penetrating radar system. An additional potential benefit to the EM-31 survey was the possible correlation of electrical conductivity with the degradation of petroleum hydrocarbons, consistent with similar recent findings by others.

By accurately locating the drainage trenches, Mundell was able to accurately assess the total petroleum impact at the site with precisely positioned soil borings. Boring results indicated that a large portion of the petroleum hydrocarbons in the unsaturated soil were associated with the drainage trenches. In addition, after removal of impacted material, the trench system was eventually incorporated into the groundwater remediation system at this site, acting as a near-surface groundwater collection system.