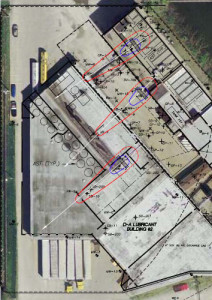 The project Site is the D-A Lubricant Company (DA) bulk oil facility located on the near northwest side of metropolitan Indianapolis. One spill, of approximately 10,000 gallons of heating oil, reportedly occurred in 1987. Another spill, of approximately 4,000 gallons of automatic transmission fluid (ATF), occurred in mid-1993. Initial remedial activities at the Site included removal of approximately 2,760 cubic yards of soil from the facility in 1995. 1996 brought the installation and initialization of a remediation system that would remove liquid phase hydrocarbons (LPH) by pumping and destruction of adsorbed hydrocarbons in the soil column by augmented bioremediation. The remediation system operated from April 1996 through January 2001.

Mundell & Associates, Inc. was retained by a partnering consulting firm to assess the potential exposures that could result from leaving the residual groundwater impacts in place. A combination of total petroleum hydrocarbon (TPH) fractionation assessments and chemical transport modeling studies were utilized in concert to complete a non-default closure evaluation. Mundell was responsible for the chemical transport modeling portion of the exercise.

Review and evaluation of the geologic and hydrogeologic setting of the Site was completed for the purpose of defining appropriate Site conditions and input parameters for performing the chemical transport modeling. This information provided the type, extent and concentrations of remaining impacts at the Site.

Chemical transport modeling analyses were then performed to determine the long-term potential exposure concentrations that could result downgradient of the existing remaining chemical source areas if no further remediation activities were completed.

A three-dimensional analytical equation was used for this analysis based on that developed by Sagar (1982) as contained in the computer code BIOSCREEN-AT model (Newell et al., 1996).  The geometry of the transport scenario addressed by the Sagar solution is the 3-D advective-dispersive transport equation in a uniform flow field, considering linear retardation and first-order decay.

Based on the simulated plume geometries, the chemical transport modeling indicated that no dissolved concentrations of the remaining COCs would likely ever be transported off-Site at concentrations above the applicable maximum contaminant levels.  As such, the remaining groundwater concentrations were determined to be acceptable from a human health risk exposure standpoint.