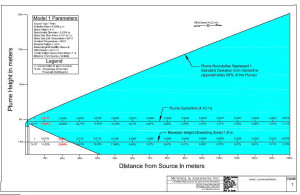 A remediation system designed by Mundell for a client included an air stripper for the removal of volatile organic compounds (VOC’s) from impacted groundwater. An air stripper works by passing an air stream through impacted water, causing VOC’s present in the water to volatilize into the vapor-phase. The VOC’s are then carried by the air stream out the discharge stack of the air stripper and into the atmosphere. The remediation system would be located in an operating industrial facility and Mundell’s client was concerned that the off gas from the air stripper stack would be an odor nuisance to the employees at the facility. The most prevalent VOC present was Cumene. This was a possibility as the odor threshold (the minimum concentration of a substance in ambient air at which it is detectable by the human nose) for Cumene is relatively low, 0.088 parts per million by volume (ppmv). 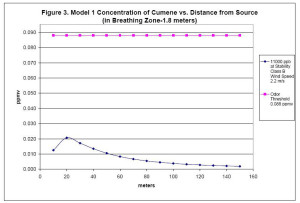 Mundell’s report showed that even under the “worst case scenario” influent and atmospheric conditions, the resulting off-gas concentrations for the air stripper would remain well below the odor threshold for Cumene. Based on this information the client was able to avoid the use of an off-gas filtration system, resulting in substantial cost savings over the life of the remediation system. The report Mundell provided allowed everyone involved in the project to feel confident in this decision and was suitable documentation for presentation to any associated regulatory agencies if necessary.