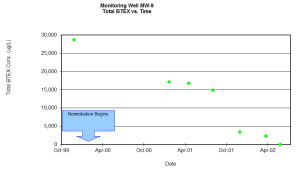 A regional petroleum retailer closed a facility that had been in continuous operation since the late 1940’s. A total of 13 underground fuel storage tanks were removed from the site, including several which were installed when the site was originally developed. Because of the presence of separate-phase hydrocarbons and petroleum hydrocarbons on-Site and the off-Site migration of impacted groundwater 1,000 feet downgradient, the Indiana Department of Environmental Management (IDEM) ranked the site as a ‘high priority’ requiring soil and groundwater remediation. Mundell was contracted by the site owner to evaluate the site, and provide cost-effective remedial alternatives.

Mundell personnel initially utilized a mobile dual-phase vacuum system to recover separate-phase hydrocarbons from selected monitoring wells. Once the separate-phase hydrocarbon levels had been reduced, Mundell personnel designed and installed an aggressive air-sparging/soil vapor extraction system to remediate the groundwater and soil beneath the site.

This sparge-vent remediation technology was used to successfully reduce on-Site soil and groundwater contamination. The remediation system was turned off once on-Site contaminant concentrations were below regulatory limits.