You are here: Home / Company News / Governor Holcomb signs Covenant Not to Sue for former gas station site in Wanamaker 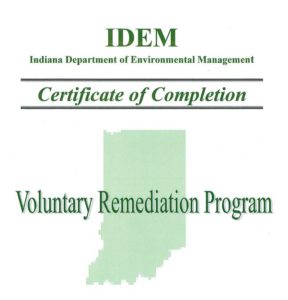 The site of a former 1950’s gasoline filling station in Wanamaker, Indiana has received the State of Indiana’s Covenant Not to Sue after completing voluntary site remediation and documentation of site activities.

Around 1959, the Sinclair gas station closed for business, taking the underground storage tanks out of service at the site (i.e., the fuel was removed and the USTs were filled with water) according to standards of the time. However, upon their removal in recent years, an analysis of soil and groundwater determined small amounts of petroleum hydrocarbons, consisting primarily of gasoline, had leaked from the tanks into the immediate surrounding area.

Mundell was contacted by landowners in to perform further analysis of areas outside the tank area to identify any potential impacts to human health and the environment. After undertaking drilling, sampling, chemical analysis of the soil and groundwater, plus additional geophysical investigations of metal detection and an electromagnetic conductivity survey, Mundell identified the contamination had spread outside the initial tank pit and delineated the boundaries of the groundwater plume. No critical threats to the environment were apparent and, over the next several years, monitoring and plume stability analysis concluded the plume was stable, may be shrinking in size, and would remain within the confines of the boundaries, attenuating naturally through time.

Based on the data that indicated the impacts were limited to the area (the contaminants are not mobile), the dissolved hydrocarbon plume is stable or shrinking in size, and the site is not within a geologically susceptible area, wellhead protection area or near private drinking wells, Mundell recommended site closure under the conditions that the site can only be used for non-residential purposes in the future.

On December 15, 2017 the Commissioner of the Indiana Department of Environmental Management approved the site closure by issuing a Certificate of Completion of the Voluntary Remediation program and on February 2, 2018 Governor Eric Holcomb signed the Covenant Not to Sue, protecting future landowners and allowing industrial development on the site to proceed.

What is a Covenant Not to Sue?
When the State of Indiana issues a Covenant Not to Sue for a project completed via the Voluntary Remediation Program, the holder of the certificate (a current or future landowner) is protected against any public or private claims in connection with the hazardous substance as detailed in each specific project.