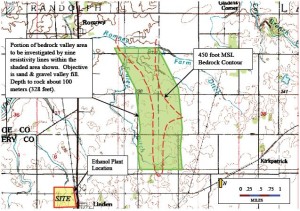 The high cost of energy and the dependence on foreign oil has recently generated a renewed interest in alternative fuel sources. One of the most promising of these alternative fuel sources is ethanol. Given the proximity to a source of inexpensive corn, many ethanol plants have recently been commissioned in the Midwestern states. However, considering that a 110 million gallons per year ethanol plant can consistently consume up to 1200 gallons of water per minute, the necessity for a good water source is paramount. Mundell was contracted to use geophysical methods to locate potential wellfields for an ethanol plant in central Indiana, within a three square mile area.

While the geology of the surrounding area is dominated by glacial features, published reports indicate that a minor bedrock valley approximately 1 mile wide, and up to 100 meters deep, trends south-north through the study area (see inset above). This valley is apparently a tributary to the ancient Lafayette (Teays) valley system that lies buried in north central Indiana and runs roughly from east to west. It is believed that alluvial deposits in this tributary valley might provide a productive aquifer. Mundell used two-dimensional electrical resistivity profiling to detect this valley by quantifying the electrical properties of the upper 80 to 120 meters of the subsurface along nine (9) lines of data collection (see inset left). Several of these lines were run end to end, allowing up to one mile of continuous data profiling.

Due to the unusually long length of the lines, the two-dimensional resistivity technique was able to characterize the bedrock valley, as well as the deep alluvium deposits. Drilling of the aquifer bearing material in this area consistently yielded 1000 gallons per minute from a single test well, which was more than sufficient to satisfy the demand of the ethanol plant. 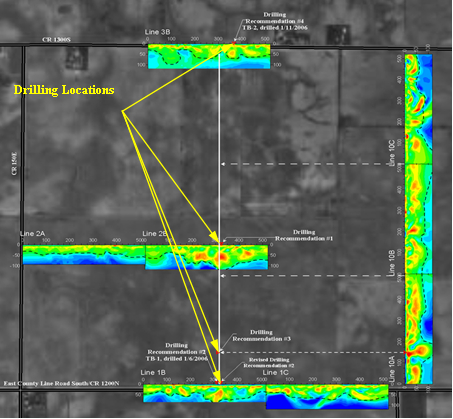