You are here: Home / Portfolio / Subsurface Imaging of Slope Failures 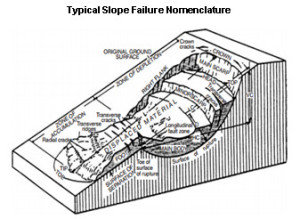 As a part of a good slope stability study, it is necessary to have a good approximation of thickness of the existing soil/talus (debris) layer overlying the bedrock along the slope. However, this always proves to be a challenge, as most standard drill rigs are incapable of drilling on the said slopes. Recently, Mundell solved this problem by performing a non-destructive and a cost effective geophysical investigation to image beneath several failing slopes along a portion of State Road 66 in southern Indiana.

Mundell used the two dimensional electrical resistivity method to image 20 – 30 feet beneath four steep and densely vegetated upslope sections along the roadway. This technique allowed Mundell to not only characterize the thickness of overlying soil/talus, but to also image potential failure zones within the bedrock as well.

The geophysical survey was successful in imaging the unique character of the unconsolidated soil materials overlying bedrock beneath the slope. The variation in the orientation of the soil/bedrock layers beneath the slope helps to illustrate key slope failure features: zones of depletion and accumulation that have likely resulted from multiple past slope movements, as well as potential longitudinal fracture zones. The data proved to be extremely valuable in the road-slope stability design phase.