You are here: Home / Portfolio / Site Assessment at a Former Gasoline Station 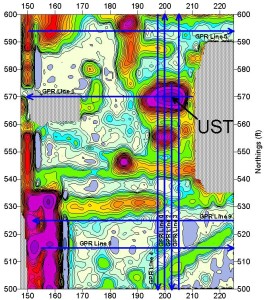 A Phase I Environmental Site Assessment was performed on an old industrial property near downtown Muncie, Indiana. Sanborn Fire Insurance Maps had indicated that the property had once been the site of a gasoline station dating back to the early 1940’s. There were no records to indicate the exact location of the underground storage tanks (USTs), and subsequent redevelopment had significantly altered the landmarks noted on the Sanborn Fire Insurance Maps. Mundell was brought into this project to assist the environmental consultant in determining whether USTs persisted at this site.

To accomplish the project goal of locating old USTs, Mundell performed a comprehensive geophysical survey over the entire area of interest. The first phase of the geophysical survey was to conduct a tightly gridded Geonics EM-61 metal detection survey. The main objective of this survey was to map the locations of all buried metallic objects including USTs and associated piping. Following the creation and interpretation of the EM-61 map shown to the right, the geophysical team then performed selective ground penetrating radar data collection along the blue lines shown on the EM-61 map to determine the nature of the metal detection anomalies.

There was no visual evidence of prior gasoline station operations at this site as it had been recently paved and landscaped. However, the EM-61 metal detection map (above) showed the presence of buried metallic objects in dramatic fashion. Several utilities or product and vent lines are apparent on the EM-61 data, shown as linear anomalies. In addition, several discrete metallic objects were revealed including one specific object, which had morphology typical of USTs. This anomaly was investigated further using ground penetrating radar. A portion of north-south Line 0 is shown to the right, and the curved shape of the UST is clearly depicted. This UST was found to be 3,000 gallons in capacity. Subsequent soil boring activities revealed this UST was the source of significant soil and groundwater contamination. The use of geophysics on this project was crucial to its successful completion.