You are here: Home / Portfolio / Limited Groundwater Investigation and Methane Testing and Mitigation 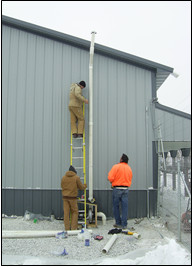 Mundell was contacted in 2005 to perform a limited groundwater investigation at an auto storage facility in Indianapolis, Indiana. The Site is located southwest of downtown Indianapolis and adjacent to the White River. The area is primarily industrially zoned. The Site was the former location of a landfill that was closed in 1979. A U.S. EPA CERCLA Preliminary Assessment was performed on the site in 1984, with a CERCLA Site Inspection completed in 1985. The current owner desired an additional limited study to determine if it is feasible to enter the property into the Indiana Department of Environmental Managements Voluntary Remediation Program (VRP). Mundell was also contacted in November 2005 to provide technical support for emergency evaluation of the indoor air quality at the Site, and for air quality mitigation that followed. 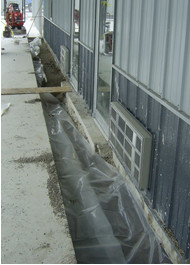 Air Quality Investigation: Due to the fact that the building had been constructed over a landfill there was reason to believe that the observed odors indicated the presence of methane. The Percent Lower Explosion Limit (%LEL) levels warranted immediate action. Mundell promptly advised that pockets of explosive gas may exist inside and outside the building. The saw cutting of a trench along the exterior of the south and the east wall was performed. The concrete and asphalt in these trenches were removed to allow methane vapors accumulating under the slab to vent to the atmosphere rather than inside the building. It was advised that a more active remedial approach would be needed to further reduce methane levels below the American Conference of Governmental Industrial Hygienists Threshold Limit Value (ACGIH TLV) for methane. PVC perforated pipe was placed in the trenches and was plumbed into cast aluminum hazardous location blowers. The system was designed and constructed to apply a low amount of suction beneath the slab and vent the methane vapors out of the subsurface to the outside atmosphere above the roofline of the building.

Post remedial indoor air methane concentrations were all well below the ACGIH TLV limit, the active remedial system appears to be successfully preventing a large portion of the methane gas from entering the building.