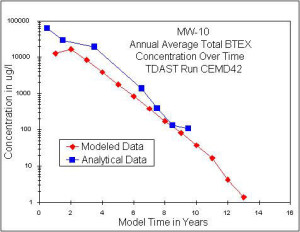 The City of Indianapolis’ West Street site was a former department of transportation maintenance facility that had been contaminated with petroleum hydrocarbons resulting from the leakage of underground storage tanks. The leaking tanks along with impacted soils were removed in 1991, with free-phase gasoline product and high levels of benzene, toluene, ethylbenzene and xylene remaining in the groundwater. Because of its nearness to the White River and the presence of free-product on the groundwater table, the Indiana Department of Environmental Management (IDEM) ranked the site as a ‘high priority’ requiring groundwater remediation. Mundell was contracted by the City’s Environmental Resources Management Division to evaluate the site, and recommend cost-effective remedial alternatives.

Mundell personnel initially evaluated a standard pump and treat option and determined that significant groundwater pumping from a recovery well (of greater than 100 gallons per minute) would be required to capture the existing plume. Life-cycle remediation costs using this approach were estimated to be well over $1 million. As an innovative alternative, Mundell hydrogeologists developed a corrective action plan based on their predictions from groundwater and chemical transport mathematical modeling, that indicated ‘natural attenuation’ resulting from the chemical source removal would ultimately be effective in reducing contaminant levels to concentrations protective of human health and the environment.

IDEM accepted the approach on a trial basis, and groundwater quality monitoring of the site over a 9-year period has proven those predictions to be accurate. This innovative approach has achieved a site cleanup that is protective of human health and the environment at a cost savings of well over $1 million to Indianapolis tax payers. IDEM awarded the site the first closure in the State of Indiana using its new RISC guidance. For this work, Mundell and the City of Indianapolis were also awarded the 1999 A. I. Levorsen Memorial Award by the American Association of Petroleum Geologists, its top environmental prize presented annually for work that, in the opinion of the AAPG, advances the state-of-the-art in the environmental field.