You are here: Home / Portfolio / Karst Feature Mapping Beneath a Proposed Substation Location

Mundell was hired by an electric company in southern Indiana to provide insight into the development of karst features beneath the site of a substation expansion project. The portion of the state in which the site is located is known to be susceptible to the formation of karst features such as voids and sinkholes. This area, known as the Mitchell Plain, is underlain by Middle Mississippian limestone formations, which are very solution-prone. During construction of the original substation, numerous karst features were encountered, including a cave, and it was believed that these types of features may exist beneath the expansion areas as well.

To map out karst features across the site, Mundell utilized EM conductivity mapping in conjunction with two-dimensional resistivity testing to measure the variation in the electrical properties of the upper 100 feet of subsurface. Mundell collected conductivity data across the entire ten (10) acre site, and used that data to govern the placement of six (6) resistivity profile lines (see figure below) designed to further characterize features of interest. The data from the resistivity lines was then compiled into a three-dimensional data set, and slices of electrical resistivity were taken at 10 foot intervals to map out the deeper karst features across the site.

Numerous karst features were detected from the conductivity and resistivity data. The results of the geophysical work allowed the electrical company to know the locations and extent of karst feature development across the site, and to then safely engineer around those obstacles. 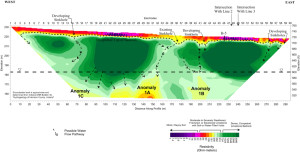 Resistivity slices taken at 10 foot intervals beneath a proposed substation location to indicate the presence of karst features.