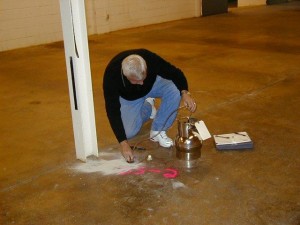 The site has an approximately 28,000 square foot single-story building with concrete block walls and a concrete floor slab situated on a one-acre L-shaped property divided into two parcels separated by an alley. Phase I and Phase II Environmental Site Assessments were completed on the property that indicated the property had been used by several commercial operations (restaurant, vehicle sales, glass company, gas station, commercial printing) since the 1940s. In 1974, began a commercial printing operation and continued operations until 1997 when the current owner purchased the facility. The investigations revealed the site’s groundwater was impacted with the chlorinated organic solvents tetrachloroethene (PCE), trichloroethene (TCE) and other volatile organic chemicals from an adjacent, off-site source. Additional site characterization work confirmed that these impacts were most likely emanating from this property. 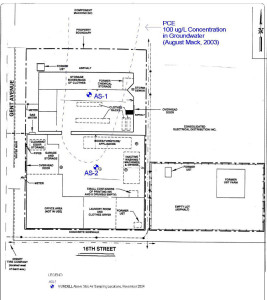 Mundell conducted air sampling at the facility in to determine if the groundwater impacts had resulted in degradation of indoor air quality within the existing site building. Sampling events demonstrated detectable concentrations of PCE, TCE and 1,1,1‑TCA within the indoor air ‘breathing zone’ of the site building likely due to the underlying groundwater impacts previously observed. The two (2) above slab ‘breathing zone’ air samples inside the building indicated airborne concentrations of TCE above both the current adjusted draft U.S. EPA guidance target indoor air concentration and the draft IDEM default concentration. However, all detected ‘breathing zone’ air concentrations were within the OSHA Permissible Exposure Limits for the respective compounds, and therefore did not appear to pose a short-term occupational human health risk. Subsequent air sampling demonstrated 20 to 50 percent lower concentrations under building ventilation operating conditions, and represented a substantial reduction resulting from the ‘floor drain and crack sealing efforts’.

As a result of the sealing of cracks and drains effort, concentrations are below OSHA PELs for this, and therefore do not pose a short-term occupational human health risk. The OSHA PELs are the only regulatory standards that currently apply to this site, and should be regarded as the concentrations against which occupationally-acceptable conditions are measured. Based on this criterion, the site indoor air conditions are well within the acceptable range and satisfy regulatory requirements.