You are here: Home / Portfolio / Delineation of Impacts and Vapor Intrusion Mitigation Associated with a Former Dry Cleaner 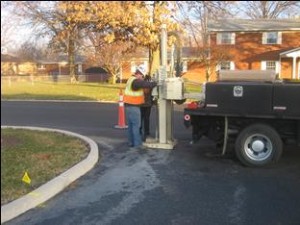 Mundell was retained to provide consulting services at a former dry cleaner facility in Muncie, Indiana. Despite several phases of subsurface investigation by other consultants between 2008 and 2012, chlorinated volatile organic compound (cVOC) impacts to soil and groundwater were not fully delineated. Based on investigations completed by previous consultants, the maximum tetrachloroethylene (PCE) concentration identified in site soil was 51 mg/Kg, and the maximum dissolved concentration was 2,000 μg/L.

Between September 2012 and September 2013, Mundell advanced 63 soil borings at the Site and surrounding neighborhood to delineate the nature and extent of cVOC impacts. A geophysical assessment was conducted to identify possible subsurface conduits after a review of the data and distribution suggested a subsurface drain may have provided a transport route of impact from the building northward.

Mundell identified a second chemical release area that was overlooked during previous investigations by other consulting firms. The release in this area appeared to have originated from subsurface sewer piping. Soil in this second source area was impacted by a maximum concentration of 923 mg/Kg of PCE (over 60 times RCRA landfill soil disposal limits), while the maximum concentration in groundwater in this area was 116,000 μg/L (approximately 250 times industrial closure goals). In addition, Mundell identified a second dissolved plume exceeding vapor screening levels and extending beneath residential properties approximately 500 feet off-site. A subsequent vapor intrusion (VI) study identified exceedances of sub-slab VI screening levels beneath the former dry cleaner building and two off-site residential structures. Mundell installed VI mitigation systems within each impacted building to protect occupants from potential vapor exposure.

In summary, Mundell’s aggressive and thorough investigative actions over a one-year period provided a more detailed understanding of the environmental issues associated with the Site, as it revealed a much more extensive and higher magnitude zone of on-site soil and groundwater cVOC impacts than previously identified by other consultants, and identified off-site groundwater impacts extending below several buildings at levels that warranted evaluation and ultimately mitigation of vapor exposure.