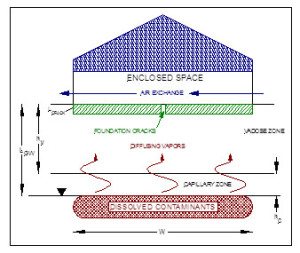 This project involved the determination of the level of human-health risk associated with the development and subsequent habitation of a housing facility for the elderly at a site with known petroleum hydrocarbon soil and groundwater contamination in Herndon, Virginia. Previous investigations and studies by others had provided information as to the extent and severity of this contamination. The primary source of this contamination appeared to be gasoline, with diesel fuel representing a secondary source. Individual chemical constituents of concern were: benzene, ethylbenzene, toluene, xylenes, and tetrachloroethene.

This assessment was conducted in accordance with the U.S. EPA guidelines and the ASTM Risk-Based Corrective Action Standard for petroleum release sites. Two potentially exposed populations were evaluated: senior residences and facility workers. For these populations, only the inhalation of vapors pathway was considered. The chemical doses associated with the inhalation pathway were calculated over a wide range of parameter assumptions to test the sensitivity of the inhalation model and resulting human-health risk to site-specific conditions. Only one exposure level was evaluated, a reasonable maximum exposure (RME), defined by the U.S. EPA, as an estimate of the highest exposure that is reasonably expected to occur at a site in a given population.

Exposure calculations indicated that the organic constituent benzene, was the target compound that controlled the degree of risk to human health. Sensitivity analyses indicated that of all site-specific parameters input into the exposure model used, the degree of cracking of the foundation slab which controls potential petroleum vapor migration into the facility is the parameter that most affects the expected degree of human-health risk associated with residual contamination. Exposure calculations indicated that the presence of a well-maintained, uncracked foundation slab properly sealed with appropriate vapor and moisture barriers used with a passive ventilation system should reduce potential health risks to below acceptable levels. To provide suitable vapor control and site data, both vapor barrier maintenance and air monitoring programs were recommended.