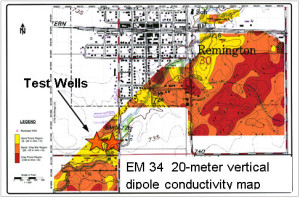 The Town of Remington, Indiana had been experiencing a water shortage in the early 2000s, and the existing water wells were not sufficient to satisfy current and future water needs. Rather than drill randomly chosen locations, Peerless-Midwest recommended that the Remington Town Council choose to conduct a geophysical survey over several hundred acres of land available for exploration on the outskirts of town. Mundell was subsequently subcontracted by Peerless to conduct the survey for the town’s groundwater resources.

Peerless drilled three of the recommended locations identified by Mundell and installed production wells in the two best locations (shown as stars on the above inset figure). Each new production well location encountered more than 20 ft of additional sand and gravel than had not been encountered before, and produced in excess of 800 gpm, double any prior well yields. The production wells are expected to yield at least 300 gpm under sustained pumping conditions. 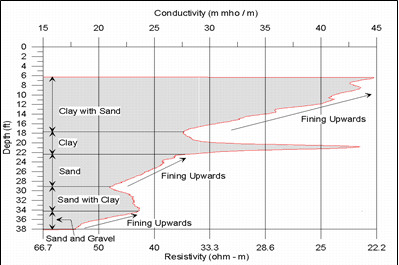