You are here: Home / Portfolio / Examination of Concrete Bridge Beams with GPR 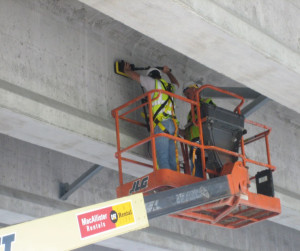 Mundell was recently contacted by a state regulatory agency to test and confirm that the bridge beams of a new interstate bridge complied with design specifications, prior to the pouring of the bridge deck.

The proposed solution was to perform a GPR survey of two random beams (one spanning the northbound lanes, and one spanning the southbound lanes), in order to verify the spacing of reinforcement and the placement of the pre-stressed (PS) cables. The beams were scanned using a Sensors and Software Noggin Plus GPR System equipped with a shielded 1000-megahertz antennae and corresponding Smart Handle attachment.

The GPR data confirmed that the PS cables transitioned from the top flange of the beams at the end bent to the top of bottom bulb over a distance of approximately 40 feet, which was consistent with the engineers specifications. It was also determined that the vertical reinforcement varied from a 3 inch separation close to the end bends, to a 6 inch separation 4-5 feet from the end bents, to a 12 inch separation at 23-24 feet from the end bents. This too was consistent with the design specifications. In the end, Mundell’s data satisfactorily convinced the regulatory agency of the proper construction of the bridge’s support features, allowing the construction process to continue in a timely manner and the bridge to be completed on time. 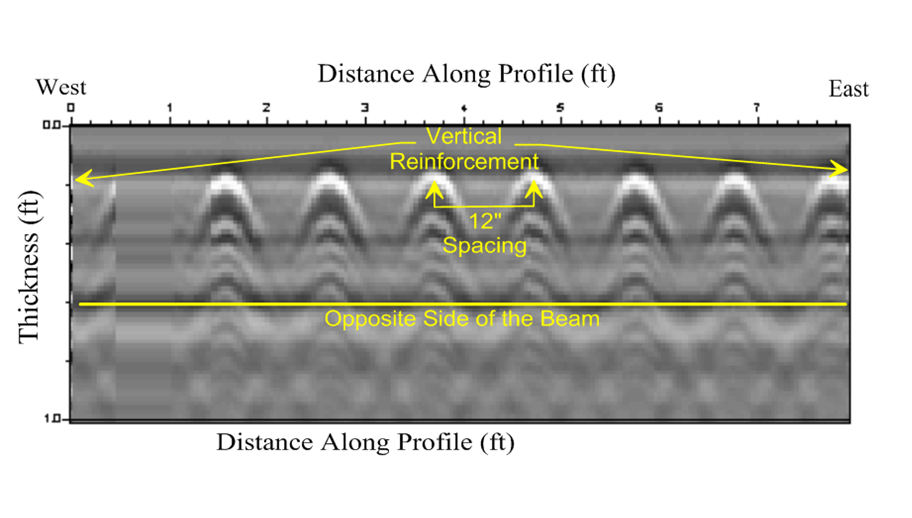 A section of GPR profile to locate spacing between vertical reinforcements for concrete bridge beams.