You are here: Home / Portfolio / Blast Monitoring During Demolition

During the demolition of the former Keystone Towers in Indianapolis, Indiana, Mundell was contracted to monitor ground vibrations, to verify that seismic levels did not exceed the pre-established standards.

An Instantel Mini Mate Plus, with corresponding tri-axial geophone and microphone, was selected for monitoring the building implosion, and brought to the site for setup. However, during the preliminary testing conducted prior to the implosion, the instrument failed to trigger properly, and was thus not able to be used. Instead, the backup monitoring system (a Geometrics StrataView R24 seismograph, with 4.5 hertz vertical geophones) was used, which was only able to measure the particle motion in the vertical direction instead of the vertical direction, longitudinal, and transverse direction. Although not ideal, it should be noted that while a uni-directional system is not generally preferred for seismic monitoring during demolition activities due to the three-dimensional waveforms that are generated, the vertical component of these waves tend to be the largest, especially in implosion demolitions, such as this.

Three geophones were placed at an equal spacing 150 feet away from the exterior wall of the building, and two additional two geophones which were placed at greater distances than the initial array. Geophone three, the center geophone in the array closest to the exterior wall, experienced the greatest ground motion. The positive phase of this geophone can be seen in Figure 1. The peak particle velocity generated during the demotion was 0.104 inches per second, and occurred approximately 8.5 seconds after the initial detonation. This level of ground movement was an order of magnitude lower than the permissible level established by the United States Office of Surface Mining Blasting Standards for infrastructure located within 300 feet of the detonation, proving that the demolition company had performed their due diligence. 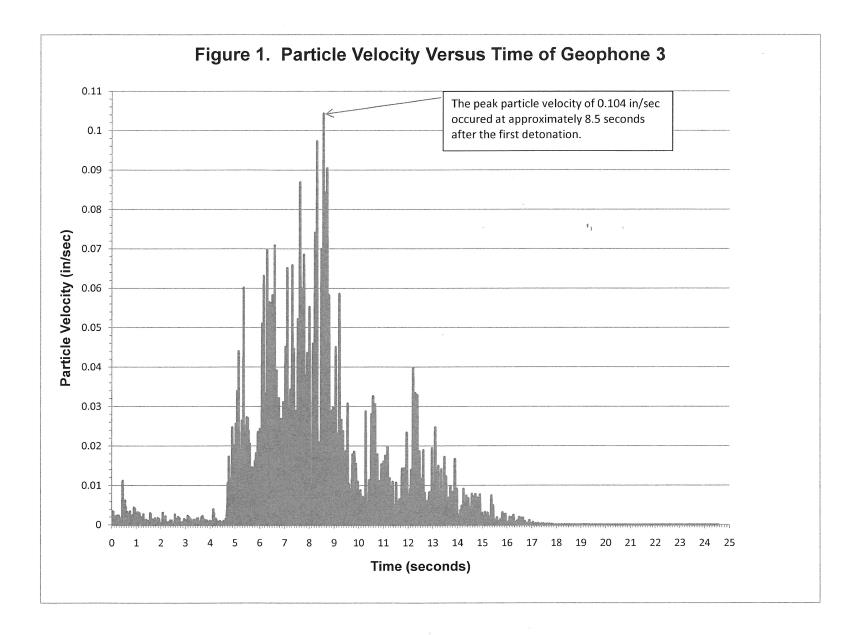